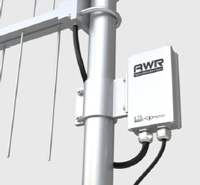 I do lots of travelling as a sound mixer. . When I arrive in a city, often the night before a job, I turn my receivers on. I scan the radio frequency spectrum for existing signals.  Will I have enough open spectrum to use my wireless microphones? You’d think this was something I’d check for before I left home. But you see, the available data is not very complete when it comes to finding open frequencies in different cities. There are plenty of published charts & software showing were the TV stations are. Often, however, the charts don’t agree with the actual location. There are more signals out there than the charts reveal. Now there’s a new, hidden, bogey for us mixers: Agility White Space Radio. Now the RF landscape will become even less predictable. These devices, designed to bring wireless internet to the rural, yet huddled masses, choose their frequencies based on a central database system, from a monopoly company called Spectrum Bridge. The signals could appear anywhere in the bands where we use wireless microphones. If we want to ask for some open space to use our mics, we can. We are to send our plans to Spectrum Bridge, and their computers will tell the local White Space Device to leave some space for us. Read about the new device and the utopian plan here. This scheme is first being deployed in Wilmington, North Carolina as a test. I’m sure the test will go perfectly, because there’s lots of money on the line. Neither Spectrum Bridge or the FCC want any trouble from pesky wireless mic users complaining about the system. Wireless signals, computers and government bureaucracy have a lot in common. Rarely do all three behave the way one assumes they should. For the moment, I’m not too worried. I have many wireless mics, spread across many blocks of frequencies. I also know about RF and how to make it work in a congested environment. Also, I hear the White Space devices are very low power, often on par with the power of a wireless mic. However, the photo shows a very efficient, high gain antenna, not only to transmit the signal farther, but to receive the signals sent by your computer.

Here’s a story: Anybody know what BPL is? It stands for Broadband over Power Line. It was a plan for deploying broadband internet. Using boxes similar to the above, BPL crammed data onto medium and high radio frequencies, and attempted to propagate it over our old, arcing, crumbling power line infrastructure. The FCC and the broadband industry saw big dollar signs and wanted it to work very, very badly. The field tests went miserably. Interference from the signals threatened existing use of aeronautical and shortwave bands. AM broadcasters and ham radio operators cried foul. The American Radio Relay League deployed lobbyists and lawyers in an attempt to kill BPL. The FCC was surprised, they thought everything was going great! What interference? We don’t hear any interference! The FCC never concluded that BPL was a failure, even after the BPL industry pulled the plug on the tests. The BPL guys now market their system for small-scale telemetry use . The threat of nationwide broadband BPL is gone, but no thanks to the FCC. With white space devices, I expect the FCC and the broadband industry will behave the same way. -by Pete Verrando www.txsound.com