In the 1970’s America, Pachinko Machines were all the rage as millions were imported from Japan. These were the used, dated machines from Japanese Pachinko parlors. The U.S. was an eager consumer of these old machines, placed under Christmas trees and in game rooms, family rooms and “dens.”  Does anybody still have a den?

Pachinko machines of this vintage require no electricity to operate, unless you want a lightbulb to flash during the payout; it takes a 9 volt battery.  All the mechanical features are powered by the gravitational weight of the pachinko balls. The machines are incredibly durable; Parlor operators in Japan routinely hosed down the machines with water and scrubbed the playing fields with straw brushes.

Modern Pachinko machines are flush with LCD screens, LEDs, loud digital soundtracks and powered ball launchers. They typically promote some movie or product. But who wants one of those garish billboards in their home? And when the power is off, they sulk like Space Odyssey’s monolith.

We found this machine for $20 at a flea market. There’s so many of these still sitting in Americas’ attics, that they don’t fetch more than $75, even in working condition. Some of the original machines from the ’20’s and 30’s will command a high price, however. And by today’s standards, the entertainment value is questionable, however quaint the operation.

We got the basic machine working quickly enough, but it soon became apparent that this device is ripe for some “electrification.”  There’s definitely may “trigger” points that can be used to execute effects- lighting, sound, and motors.  Here’s a rough video demonstration:

HOW WE DID IT:

Electrical triggers harnessed to the sound and light sources:

1. The ball “cannon”- every time its fired, or how far it is drawn back makes an electrical contact

2. The levers that move when a payout occurs trigger a microswitch

3. The rejected balls falling into their reservoir fall against a trip switch

There’s more, but multiply the above 3 by four or 5 sounds and light actions, and you have 15 or more “changes” that can occur during play.  Relays were used to command multiple triggers and keep high voltages off the trigger contacts.

Drilling through the back of the playing field allowed us to insert the LEDs from a string of Christmas lights, that are controlled by the included sequencer. The sequence changes with every payout, or gradually steps through the 8 patterns when nothing else is happening. Note: drilling the playfield creates sawdust and plastic shavings that get in the ball pathways. These all have to be carefully cleaned. The light string had 50 LEDs. Half shine through the playing field, and the other half illuminate from behind the machine.  There is also a separate, small set of lights behind the glass panel door.

Various contact triggers were installed at the ball cannon lever, the ball return reservoir, and the payout assembly. A four-track digital audio recorder/player board from electronics123.com was employed, and rigged to the triggers. A second, simpler audio recorder/player, fed by a microphone, was installed for the payout sound, to allow the user to customize the message when the payout occurs. This could be a quaint holiday message, or in my case, me screaming “Bonzai!” 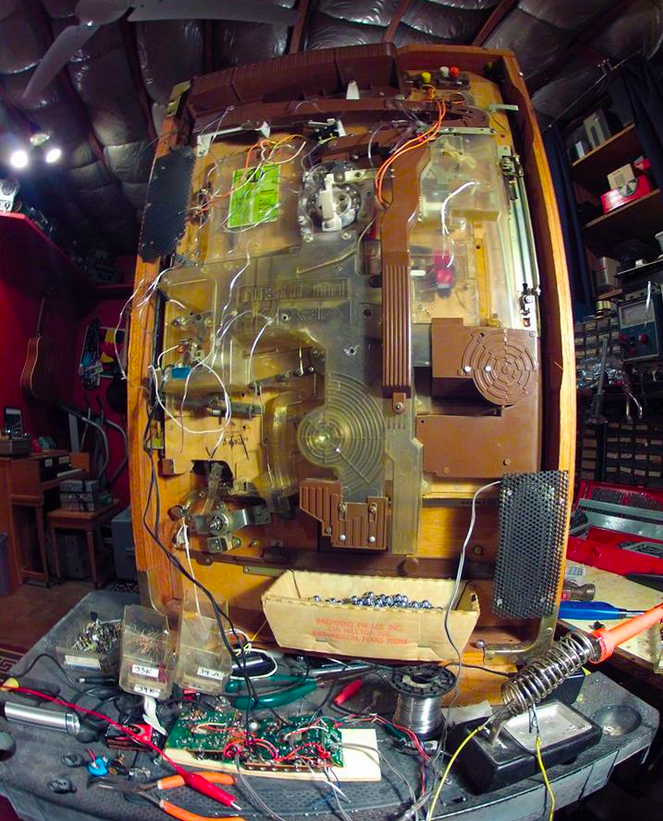 Various power supplies were required to power the audio boards, lights and motor for the spinning feature. The spinner doesn’t really do anything, it was just easy to implement, and added some appeal. The face of each spinner was given a colorful new look courtesy of my inkjet printer and some photo paper.  Lots of wire, soldering, hot glue, etc.

All the power supplies were tied into a mechanical electric timer assembly, that powers up the whole affair and also shuts it off after about an hour.

Who can take this thing for more than a few minutes, anyway? For Sale……