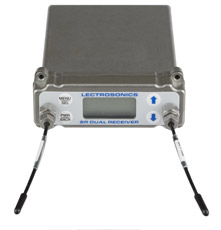 When Lectrosonics released their SR, a dual channel wireless receiver, sound mixers seized the opportunity to load unprecedented piles of these receivers in their sound bags.  The SR’s original design, however, and a host of RF interference issues from neighboring gear in their “bags”, left sound guys scratching their heads.
These receivers were supposed to be equivalent in performance to Lectro’s 401 receivers. Except they weren’t. And they were even farther away in RF performance from Lectro’s top line 411a.
The SR receivers were less sensitive than the 401’s, meaning reduced working distance from the transmitters. And in UHF, working distance is not a linear thing. One could have excellent reception at 40 feet, then the signal disappears at 42 feet !
Those guys who invested heavily in the first SRa’s (version with removable antennas) were forced to load their packages down with RF amplifiers and gain-based antennas, to overcome the range issue. Basically, they force-fed amplified signals into the SRa’s antenna jacks. Which creates another bunch of problems, but what the hell.
Months later, Lectro re-designs the RF board of the SR, bringing the RF performance much closer to the original claims. The SRb was introduced, and Lectro has a very generous upgrade policy for all those hapless mixers who invested heavily in the SRa.
However, now you have guys with piles of antennas, amplifiers, and combiners in their package. And they are chomping at the bit to plug that mess into their SRb’s.
Now, that the SRb is a more sensitive receiver, and I bet it is not going to like all that amplified RF being force-fed into the antenna jacks.  The SRb is a much-improved design, but physics is physics, and receivers will squawk like a goose destined for Foie Gras when fed too much RF.  Wait and see.
-by Pete Verrando