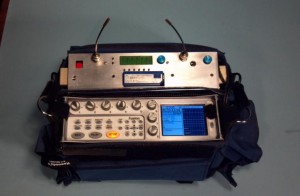 This 6 channel receiver was originally conceived as a single-space rackmount device. Lectro then quickly morphed it into a box for field use, essentially by folding the ‘wings’ underneath the main board. The resulting lunch-box affair was neat-o, but still a little bulky for real field in-the-bag use.  I’ve always looked at this product with an eye towards sizing it down, and I finally squeezed the project in this week. Primarily,  I re-designed the NP-1 battery receptacle to save a 1/2 inch off the height of the box: 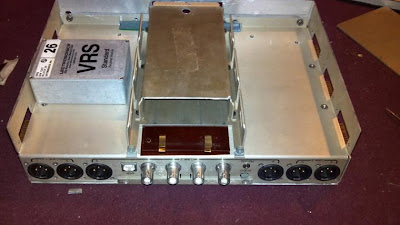 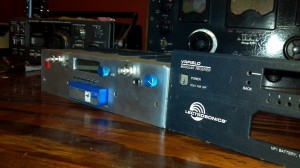 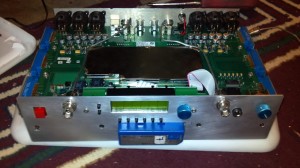 The above photos show the size savings after the mod. I also re-positioned the LCD and shaved a 1/4 inch off the top of the faceplate. Also, the antenna inputs are re-routed to the front of the cabinet. Now it can ride bag-style with some much needed space savings. Still too big for run-n-gun bag, 6 individual receivers will still occupy about half the space. Fun project, though.
-by Pete Verrando

I follow the used equipment market pretty closely. I’ve noticed the past 3 months or so a glut of block 21 wireless being put up for sale. It could be that folks are just upgrading to newer gear. But I wonder if the motivation could be based on more RF spray issues on the lower blocks. And, the crowding of dual receivers into bags with digital recorders, high output IFB and hop transmitters, wifi devices, smartphones and ipads.

I know there’s more intelligent (& cheaper/lighter) ways of dealing with stray RF than throwing more splitters, combiners, sharkfins and preamplifiers into your rig. In doing so, you are essentially re-designing the front-ends of receivers that have already been very carefully designed. But this seems to be the popular trend, based on general lack of understanding, and I’m sure the equipment vendors don’t mind at all. Of course, I’m often wrong, but certainly never in doubt.