Many folks are very excited to see the first rechargeable Li-Ion AA battery, made by Kentli. 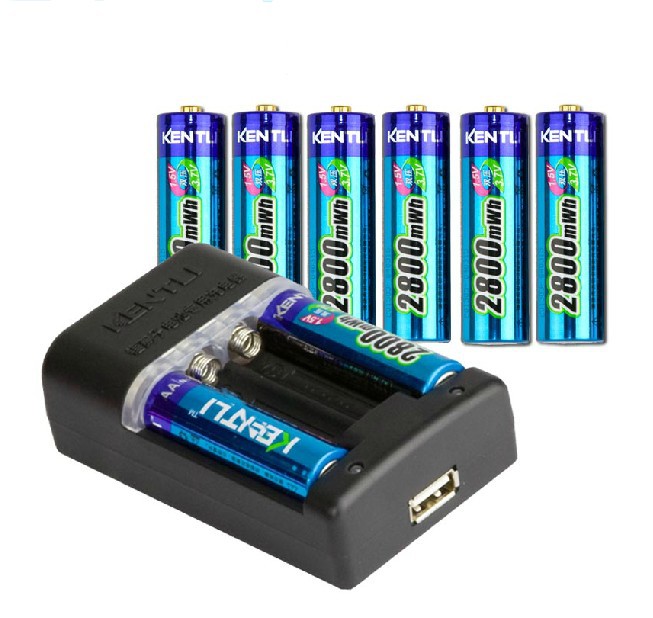 Here’s a cut-away view of their exciting new AA cell: 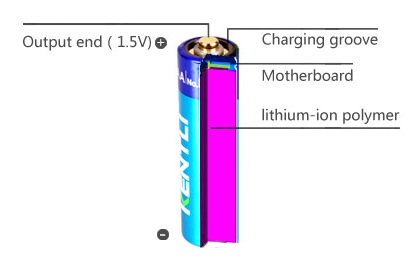 The guts of a Kentli Cell.

The Kentli AA Lithium-Ion cell was perceived as an exciting development, because all Lithium Ion cells are normally 3.7 volts. So even if the cell could fit into the AA form, the voltage was too high for 1.5 volt applications.  What Kentli did was cram a 3.7 volt Lipo cell into an AA enclosure, and also stick a 3.7volt-to-1.5volt regulator inside there as well.  The charging groove (see diagram) allowed the cell to be charged directly by the charger at 3.7 volts, bypassing the “motherboard” (regulator).

Why would we want a Li-on AA cell, anyway?  The perceived advantages:

1. Ni-mH cells, the current rechargeable of choice, provide only 1.2 volts per cell.  That missing 3/10ths of a volt can really add up when using multiple cells in series (battery)! The lower voltage also increases current draw, shortening the power-up time of the cell.

2. Lithium Ion cells maintain almost their rated voltage right up till they die  Other cells, the voltage slowly drops as the cell discharges.  Many digital devices will shut-off when the supply voltage falls to a certain level, leaving much potentially live-giving energy in the cell.

3. For their weight, Lithium-Ion cells currently provide the most deliverable power than any other type of cell. They charge fast, are very reliable, and last for many charge cycles. They are also tolerant to recharging at various states of discharge.

5. Rechargeable batteries create income, as you can bill the client for these batteries like disposables.  So, they can routinely add about $20 or more to your daily rental income, without buying disposable batteries.  Over a year, that can add up (conservatively) to about US$3000. (that’s if you work only about 14 days a month as a professional location sound mixer)

So how well do Kentli Li-ion AA cells work?

As Chinese Industry is prone to do, Kentli did some slight-of-hand marketing with these products. They listed the capacity in milli-watt-hours, so they could print that big 2800 mWh on the side of the cell.  For people who don’t pay attention, this rating gives the mistaken impression that they are more powerful than 2700 mAh (milli-amp-hour) Ni-MH rechargeables. 2700 is a common value when looking for a high quality Ni-MH rechargeable.  At 1.5 volts, 2800 mWh translates to about 1867 mAh,  so the Kentli cell technically has less power. But Kentli claims their cell lasts as long as the Ni-MH, because the regulator allows the 1.5 volts to be maintained till the cell is completely exhausted.

The street price for these Kentli AA cells is about US$11 per cell, and the charger about US$20. More expensive than Ni-MH rechargeable. They are shipped directly from China through a few distributors, including sellers on ebay.

A Lectronics SMV transmitter. 1/3rd of the package is for the cell.

We bought 12 AA cells and 2 chargers to give these units a workout in our Lectrosonics SMV transmitters.  The SMV uses only one AA cell.  A disposable Energizer Lithium AA will power it for 5 hours (the longest). The best NiMH rechargeable will power it for about 3.5 hours.

And the result? A fresh Kentli AA, right out of the box ,will power the SMV for 3.5 hours. Same as a high quality, 2700 mAh Ni-MH rechargeable.

But here’s the rub, in a few easy steps.

1. In my application, Kentli AA’s take their internal cell from a full charge to near-exhaustion in every cycle. Over the long term, I think Li-Po rechargeables prefer a lighter charge-discharge cycle. so with this workout, these Kentli cells won’t last for very many cycles. A Lectro SMQV would treat the cells more gently, distributing the current draw between two cells, and possibly resulting in better performance.

2. Kentli AA’s use a 3.7v Li-Po cell and convert it to 1.5 volts. There is inherent inefficiency in this conversion process.  The Lectro SMV then takes the 1.5 volts and inverts it up to 5 volts, and 3.3 volts, to serve the various internal functions. Every time you convert a voltage, you lose some efficiency and power, in the form of heat.  The Kentli is already stretching the capacity to the max of its tiny 3.7 volt, 760 mAh cell, every time it is charged and used. With the SMV, there are multiple conversions, and those power losses add up.

3. These days,  the “power down” mode of many devices is not a true power-down. Even after its turned-off, the SMV draws a tiny “quiescent current.” This is simply power to enable the SMV to power back up with a momentary button-push. The Kentli sees this quiescent current, and therefore keeps its motherboard alive, affecting a continuous drain on its cell. So leave a freshly charged Kentli in the SMV overnight, and it will be dead in the morning.

4. Maintaining AA rechargeables for location sound use is a pain in the ass. They get lost easily. I lost one in the snow on the very first shoot! They are difficult to keep separate between used and unused. They require chargers to be travelled and plugged-in. They require extra time to sort and charge and check at call and wrap.  They create a level of uncertainty in the production process. Will this be the shot when the battery dies for good?

5. And obviously, in the SMV, a rechargeable will run for only 3 hours, and a AA li-ion disposable will burn for 5 hours.  In most cases, 5 hours is enough time to get us to lunch, when the battery can be replaced.  The SMV is designed to accept a cell that swings from 1.9 volts to .9 volts, and before it dies, will suck every last ounce of power from the cell!

6. Don’t talk to me about the Lectro SMQV, the double AA version. I know they will run twice as long. I don’t care. I like the smally-small SMV for so many reasons. I use it as a drop-weight when running the lav cable down shirts and blouses and pant-legs. The SMQV is almost as large as a UM400A, Lectros classic 9-volt transmitter, of which I already have a shit-ton.  The SMV is great for use on children, with their tiny pockets and elastic waistbands. It also has the lowest profile in a pocket or bra-strap.

Oh, and the Kentli Chargers tend to die. 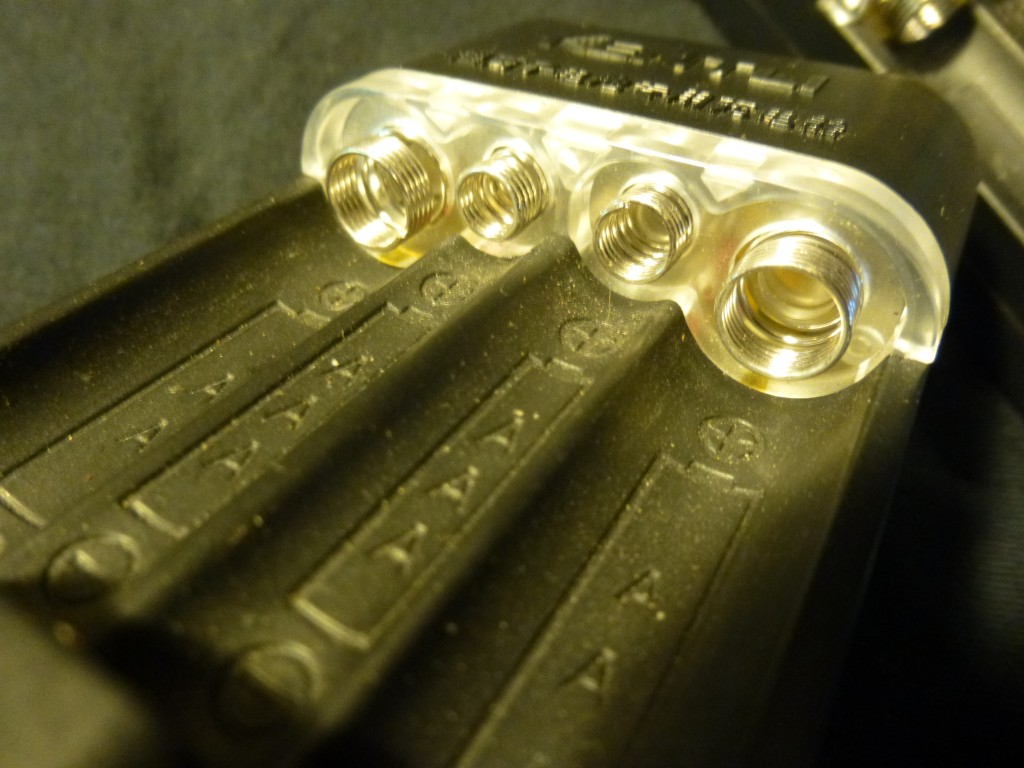 The Kentli Charger with its ring-groove contacts. They contact directly with the Li-Po battery and charge at 4.2 volts. 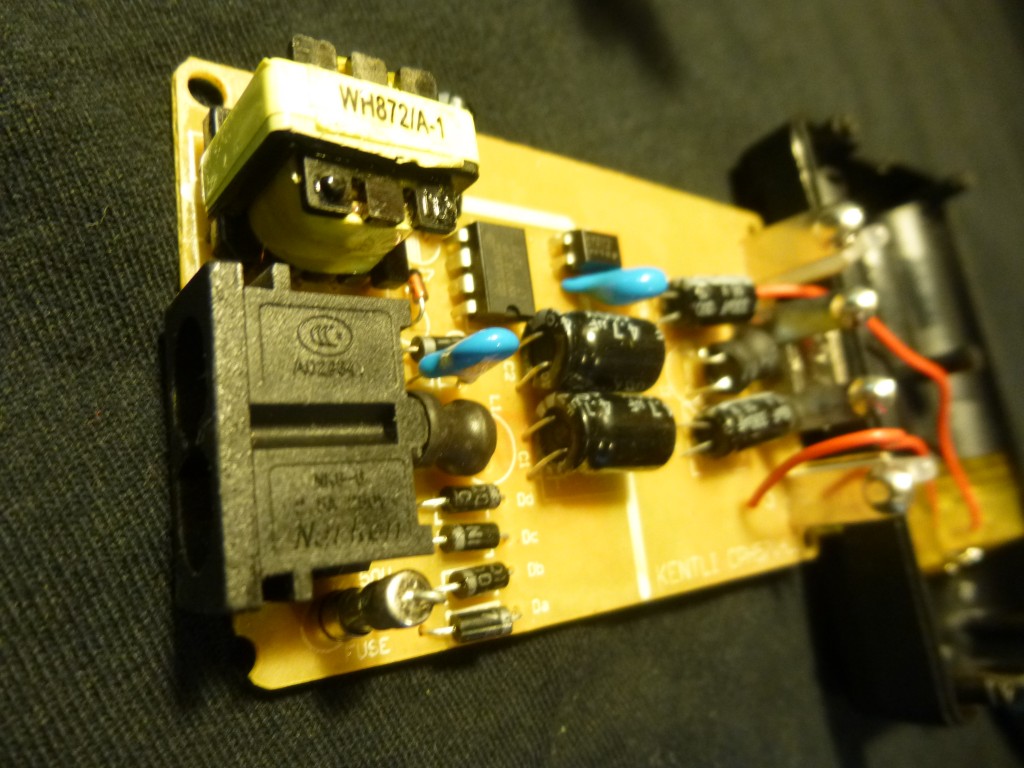 The innards of the Kentli AA charger 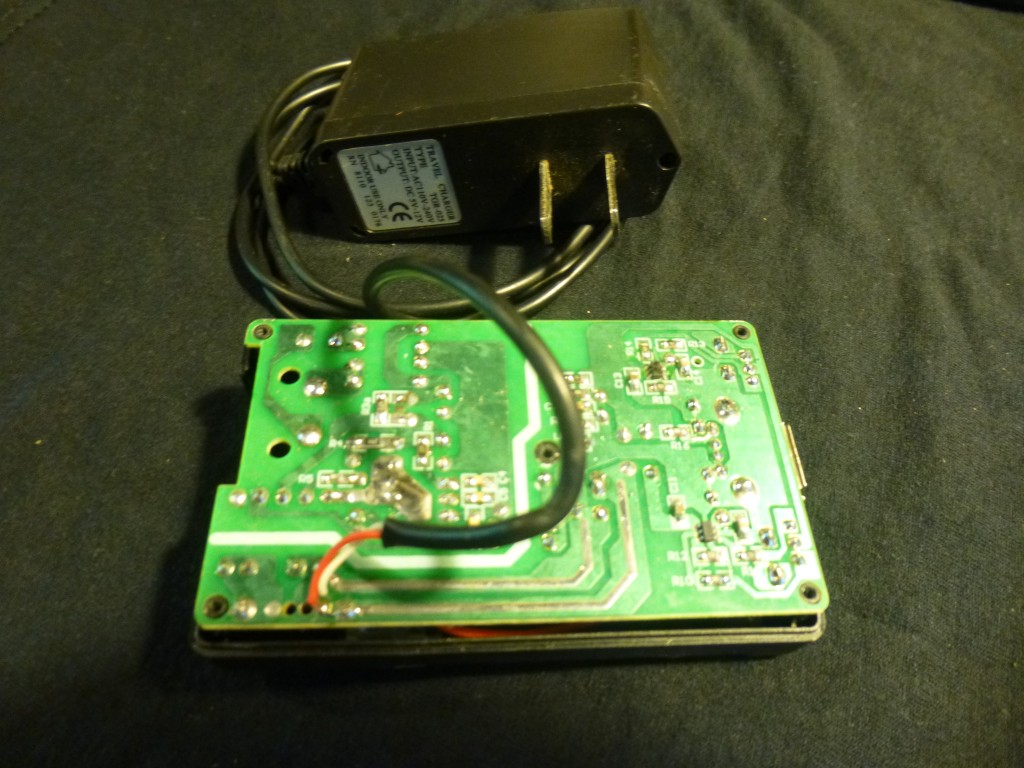 A 5 volt phone charger inserted into the 5 volt rails of the Kentli charger. Fixed!

Of the two Kentli chargers I originally ordered, one died a couple of months in. The dealer asked for photographic proof that the charger was dead. They sent a replacement from China, which never arrived, and then sent me another.  Eventually I received both chargers, so now I had four. Then the other 2 chargers immediately died.  Taking this opportunity to either throw away the dead chargers, or take them apart, what do you think I did? The charger consists of a very flimsy switching power supply converting your AC house current to 5 volts DC. The voltage is then applied to a smart charging circuit for the AA cells. The flimsy switch-mode supply was the obvious culprit, so it was replaced with an outboard 5 volt phone charger, of much more robust design. So now we have 4 chargers.

Then, the Kentli AA’s start to show signs of age.

This is about the time that the Kentli AA cells stopped delivering 3 hours of power to the SMV’s.  This is not the cell you want in a transmitter that goes out on a competition shoot, where you don’t have access to the talent once the action begins. I would guess I got about 100 charges on my Kentli’s before they began to show signs of expiration. The chargers show a full charge even on the cells that have stopped performing. In a less-demanding environment, (like an LED flashlight or an ipod dock) they may give better service.

And Alas! one Kentli drops to the floor and pops open like a Zippo Lighter! (Also the shrink wrap on the cell will begin to tear and peel with daily use. ) 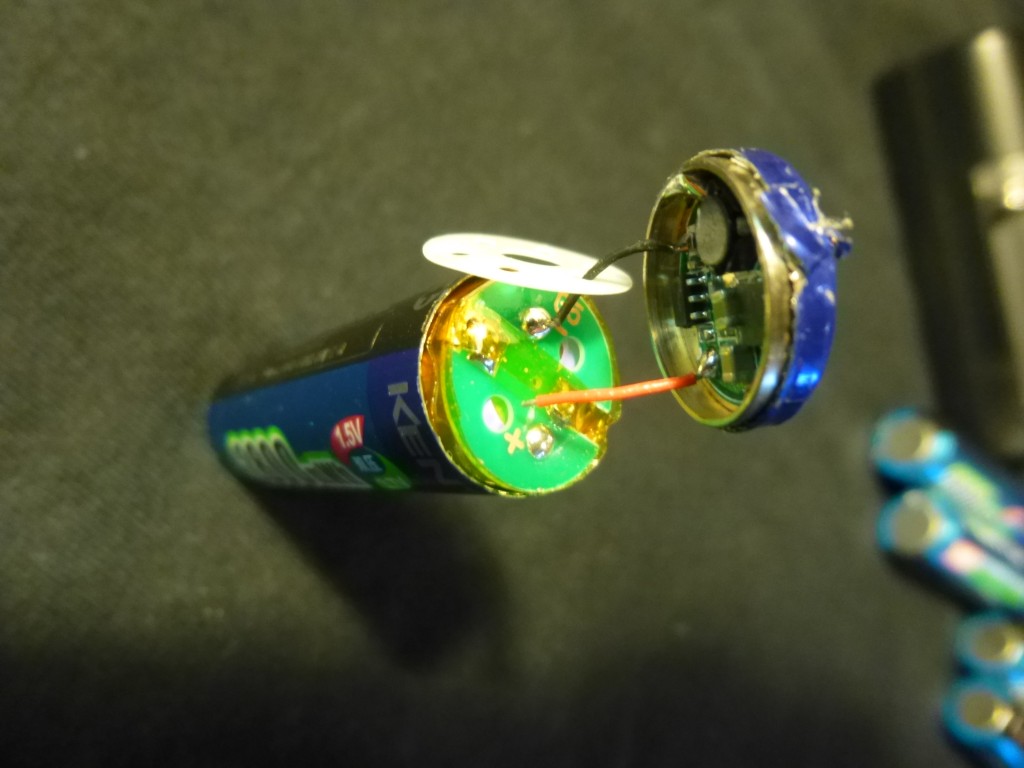 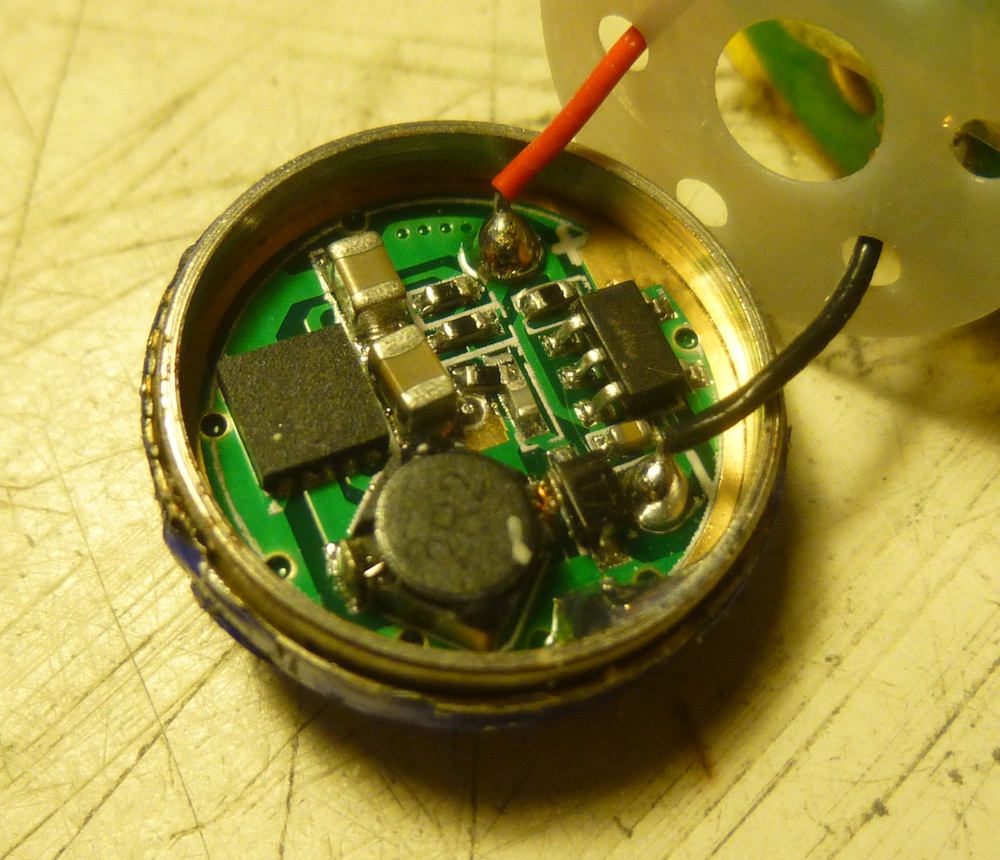 The Kentli regulator board.

UPDATE : Curious about the quiescent current draw of the Kentli Cell, on its own, we hooked up a micro-amp meter between the regulator board and the Li-Po cell. The result: 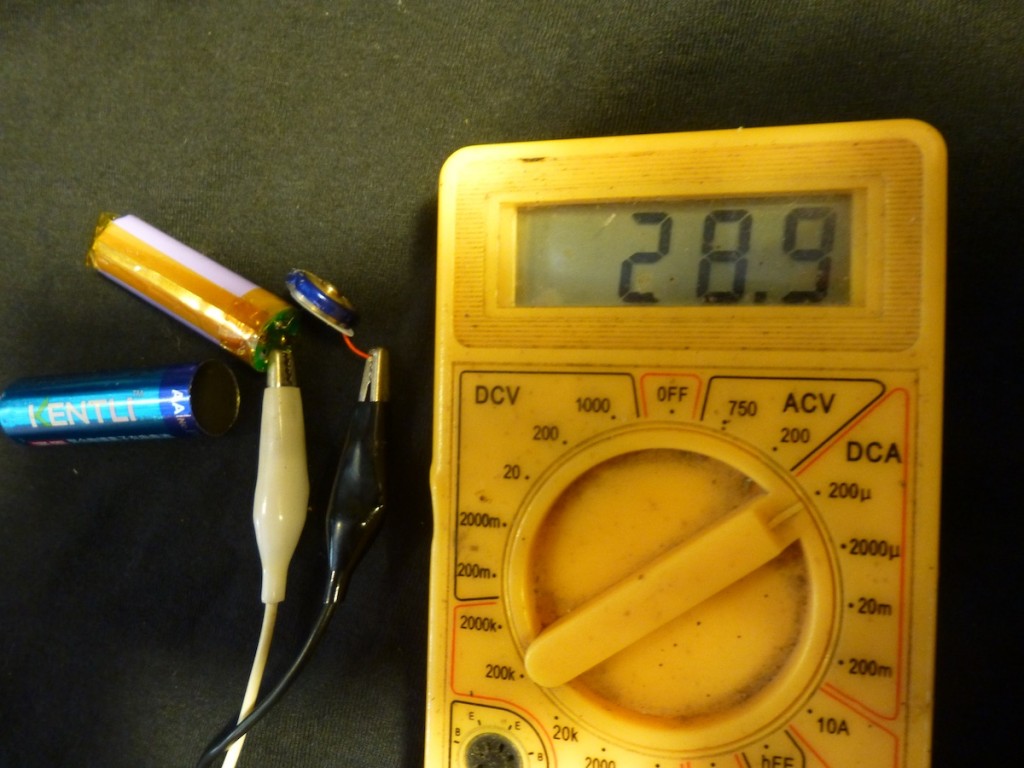 Kentli AA cells discharge on thier own, with a constant current draw of 29 microamps from the internal “motherboard.”

So there’s no doubt the Kentli folks are really pushing the envelope with this initial attempt at a 1.5V Lithium-Ion rechargeable. A little more conservative design paramaters are required for location sound use. But for flashlights and home use, I’m sure theres no telling! And no telling of what’s to become of my little AA canisters for a location sound mixer on the road!