Recently, I was on a shoot following bounty hunters around a city every night for about 10 days. Both cars worked together, with two hunters in each. Each car had a camera operator inside,  and both “hunters” were mic’d with Lectro SMV’s , transmitting directly to an SRb 2-channel receiver on the camera.


Camera mic was on channel 3/4.  Now the fun part–   a plant mic was placed in the car’s headliner dead center, and fed to an external SMv transmitter on each car. Both SMv’s at 250mw full power, and taking 12 volts  from each car’s cigar lighter. Our follow vehicle had two Lectro SNA-600 dipoles mounted about 12″ above the roof on fiberglass poles, feeding a Venue Field inside the van. The Field received the 4 officer’s wireless, & the two plant mic wireless.


On the road, the follow vehicle could reliably  hear those plant mics  up to 1/2 mile away from the hunter cars-  sometimes more in the countryside!  In the city, we would routinely loose the cars in traffic, but could usually still hear them.   This made for great follow vehicle IFB, & two clear recorded tracks of car interior when bad guys were loaded in the car. 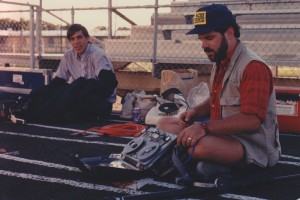 This was an industrial film for The Associates, basically loan-sharks in hi-rise offices. Cameraman Bob Tullier is in the bag, loading 16mm magazines for his Cinema Products CP-16 motion picture camera. We called it “Sherm”, short for Sherman Tank, which is what the noise sounded like from the camera body. I have a Nagra 4.2 full track mono recorder there. The mic was a Sennheiser 816. I am wearing shorts, but this was 1986 (I’m 26 here). Bob and I went to college together, graduating about 1983. So this is us making real money. Thanks, Bob, for hiring me. 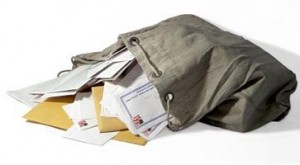 From the mailbag!  Keep those cards and letters coming!Dave, from Sydney Austrailia, writes:
Hi.
I’m considering buying an upgrade SRa (serial # is above 105…)
Are yours upgraded? How have they performed? Do you know if they have the 6 layer board?
“The 80% improvement RF board is 17378-K. The full SRb board is 17378-L”
Thanks
Dave
Hi Dave!
I never owned 1st generation SRa’s so I don’t have anything to compare, but I’ve heard that range on those early SRa’s was pretty bad. That’s why everybody started buying RF amplifiers and sharkfin antennas to hang off their bags.
Now that the SRb’s are available, those RF amps and Sharkfins will probably overload the front-ends of the SRb’s. Ha ha.
Update: I just took delivery on a used SRa- that is pre serial# 105…  Before I get it upgraded, I want to do some comparisons between it and my post-105 SRa’s,.. Range tests are pretty simple, but selectivity comparisons are difficult to simulate and measure. I’ll probably just take their word on it, and continue to do good freq. coordination.
All the best!
Pete Verrando
Dallas TX
http://www.txsound.com
Hi Pete
Good to hear about your experience. I’ll test a ‘post-105’ or ‘SRa+’ (as Larry F named it) around town if the dealer will let it out for a day or two. Keen to hear how your comparisons go as well pre and post upgrade.
Cheers
Dave
Hi Dave!
Today I did a walk test comparison of my  SRa to an “SRa+”. (same block) I used one SMV transmitter and tuned channel 1 on both receivers to the transmit frequency. I first noticed the open SRa 2nd channel (coordinated) was much more susceptible to swamping when the  transmitter for channel 1 comes too close. The SRa+ showed no evidence of swamping on the 2nd, open channel.
In a walk test, the two receivers were pretty close in range in open air, but when I placed the transmitter inside a vehicle, the SRa lost it entirely, while the SRa+ was showing about 50% signal level.
Cheers! (Except I have a vodka martini in my hand)
Pete

When Lectrosonics released their SR, a dual channel wireless receiver, sound mixers seized the opportunity to load unprecedented piles of these receivers in their sound bags.  The SR’s original design, however, and a host of RF interference issues from neighboring gear in their “bags”, left sound guys scratching their heads.
These receivers were supposed to be equivalent in performance to Lectro’s 401 receivers. Except they weren’t. And they were even farther away in RF performance from Lectro’s top line 411a.
The SR receivers were less sensitive than the 401’s, meaning reduced working distance from the transmitters. And in UHF, working distance is not a linear thing. One could have excellent reception at 40 feet, then the signal disappears at 42 feet !
Those guys who invested heavily in the first SRa’s (version with removable antennas) were forced to load their packages down with RF amplifiers and gain-based antennas, to overcome the range issue. Basically, they force-fed amplified signals into the SRa’s antenna jacks. Which creates another bunch of problems, but what the hell.
Months later, Lectro re-designs the RF board of the SR, bringing the RF performance much closer to the original claims. The SRb was introduced, and Lectro has a very generous upgrade policy for all those hapless mixers who invested heavily in the SRa.
However, now you have guys with piles of antennas, amplifiers, and combiners in their package. And they are chomping at the bit to plug that mess into their SRb’s.
Now, that the SRb is a more sensitive receiver, and I bet it is not going to like all that amplified RF being force-fed into the antenna jacks.  The SRb is a much-improved design, but physics is physics, and receivers will squawk like a goose destined for Foie Gras when fed too much RF.  Wait and see.
-by Pete Verrando