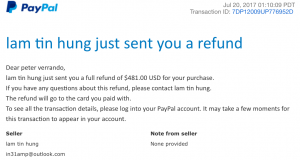 UPDATE: 7/10/2017 An Ebay return claim was filed based on counterfeit goods, and the fake 416 is on its way back to China. They fronted the return cost of shipping (US$54), and say they will refund the purchase price upon receipt of the mic. They have been very cordial in the transaction.

Last month I knowingly purchased a fake MKH416 so I could compare it with a real MKH416. It just arrived today, with case, in a padded envelope.

OK, we’ll get right to the good stuff first. If you are here looking for an competently made, uncompressed audio comparison between a real 416 and a fake 416, its just below.

After listening to the file, and maybe reading the below saga, bookmark this page, as I will be documenting my efforts in refunding the $490 spent on this mic from ebay. In the process, I’m developing somewhat of a relationship with the seller, and hope to get an interview.

The file is a 24bit, 48k stereo wav file, with the fake mic on one channel, and the real on the other. See if you can determine which is which. The file is 45MB, about 2:00 minutes. Recorded interior and exterior at different distances, on and off-axis. Use your favorite playback utility that allows you to solo A/B either channel into both ears. Or split the stereo track into two mono files and solo them. Can you identify the real 416? Left or Right?

The two mics were recorded using a Sound Devices Mix-Pre D into Audacity running on a Macbook Air. The mics were plugged straight into the side of the Mix-Pre D, setting them about an inch apart.

Which mic is which? Is the fake Mic 1 on the Left, or Mic 2 on the right? Any mixers out there confident enough to take a chance on being wrong? Leave a comment.

Fake MKH416’s have been in the marketplace for at least 3 years. They were/are sold primarily through ebay. Prices were initially very low, about US$300. When users discovered that the market was tainted by fake 416s, the sellers responded by raising the price of the mics on ebay, to make them seem more like their genuine counterparts. Sennheiser eventually took action and managed to respond with various cloak and dagger stuff on which they don’t wish to expound. They expanded their website to respond to counterfeit inquires, and added holographic labels to the boxes, stuff like that. At least with the 416, their efforts seem to  cut down much of the distribution of fakes. 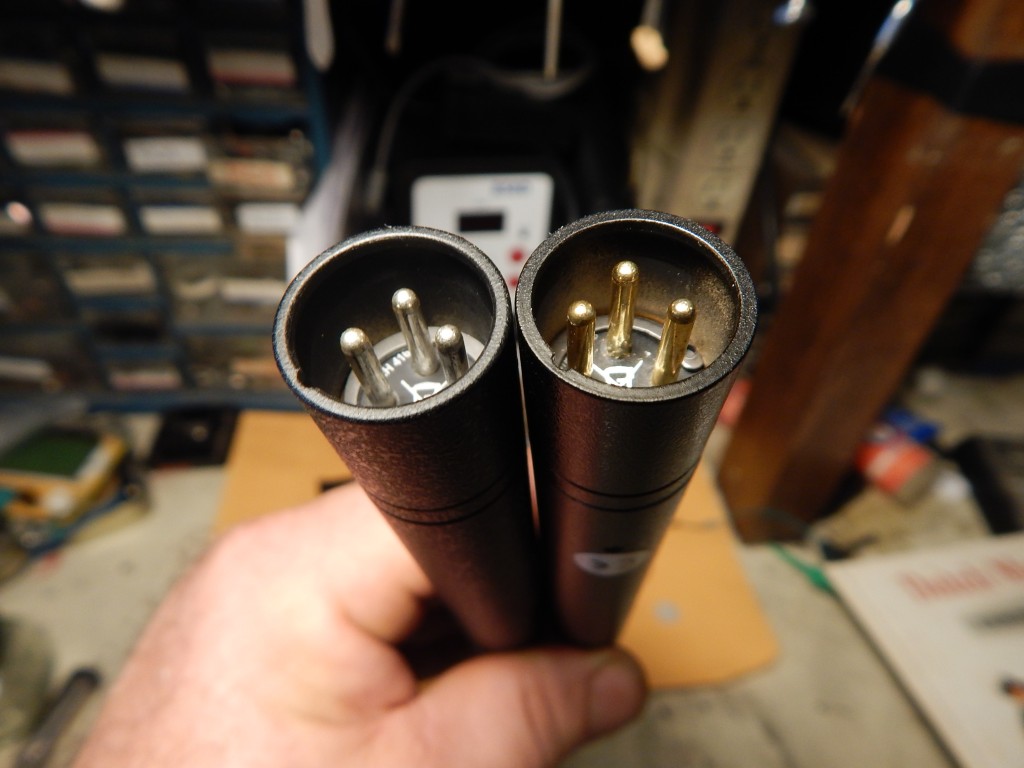 However, there are sellers on ebay peddling fake 416’s. Who knows if there are hundreds stored in some Shenzhen warehouse?

I have a sideline business that upgrades the older 416 T-power mics to 48 volt phantom at www.416Tupgrade.com. Resultingly,  I’ve been particularly interested in the daily street value of the 416 microphone, as I have ended up with a pile of them from R&D efforts. I’m interested in how the sale of counterfeits  and other marketplace factors effects the mic’s value. So I’ve been following the sellers of fake 416s on ebay for a couple of years. And my fascination with the affair led to me buying my own counterfeit 416, just to get my hands on one, and test it, compare it, and follow the seller’s trail through an ebay purchase. Down the rabbit hole I go!

A quick review of everything we know about spotting a fake Sennheiser MKH416:

They are typically sold on ebay from sellers in China. The box is the old-style blue striped Sennheiser Box. The plastic case often has the blue “Sennheiser” painted poorly. The label on the box may have the “U3” inverted to “3U”  The foam windscreen is squarely cut and looks cheap. See photos below. 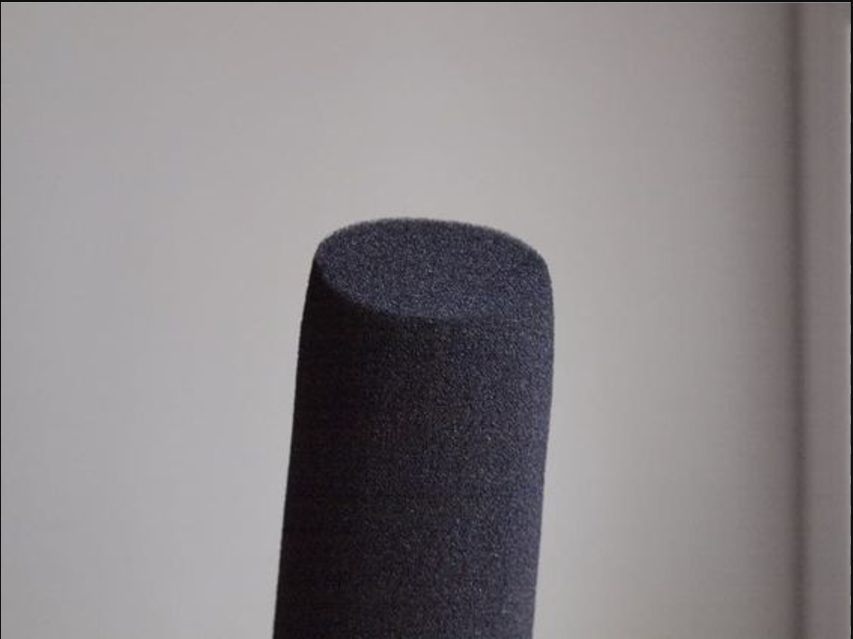 Fake 416 Windscreen with its chopped off head… 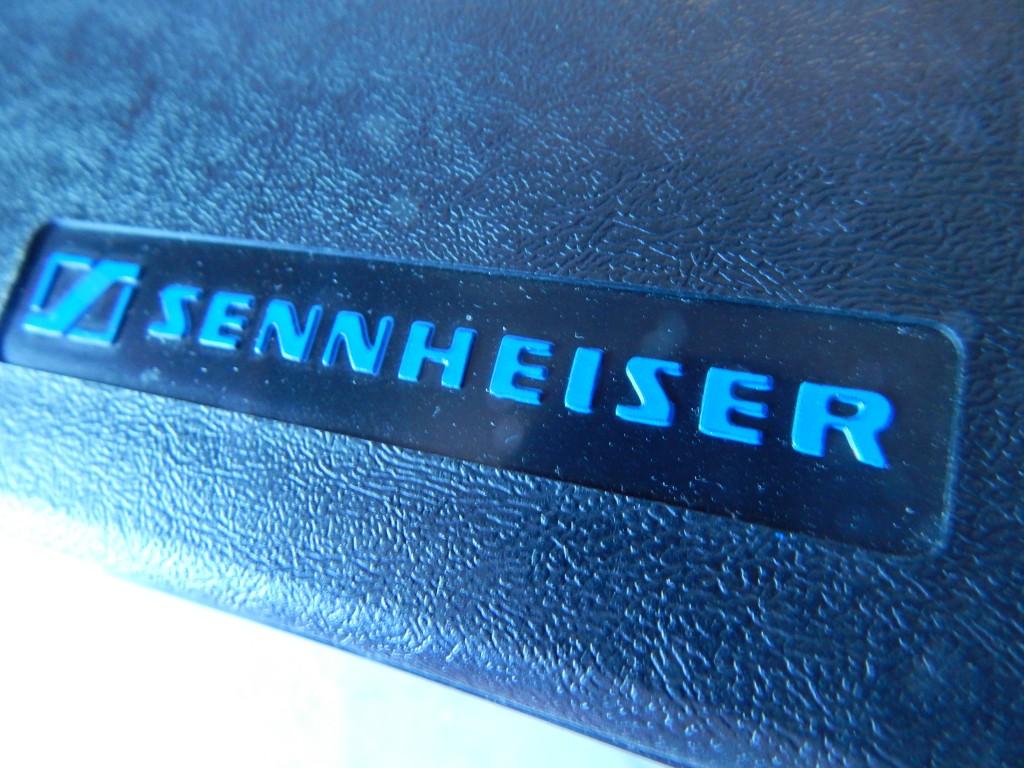 Many have said this case paint job is sloppy. This one looks pretty good.

Rusted staples on the manual, WTF? 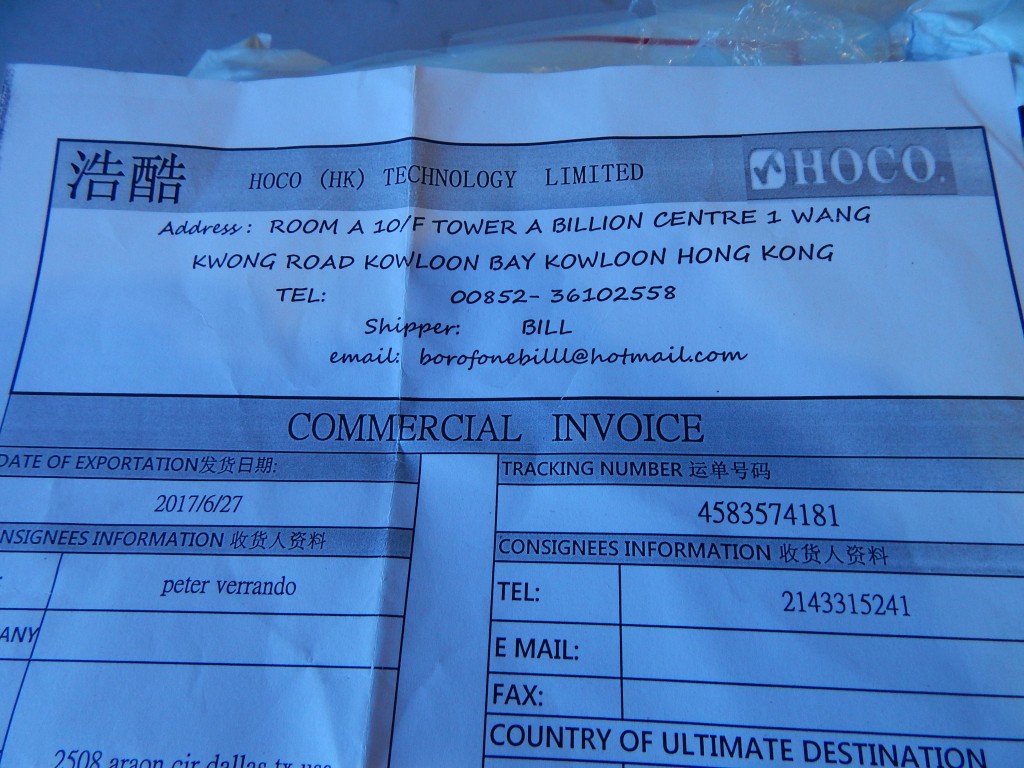 Shipping manifest from “Bill” over in Hong Kong 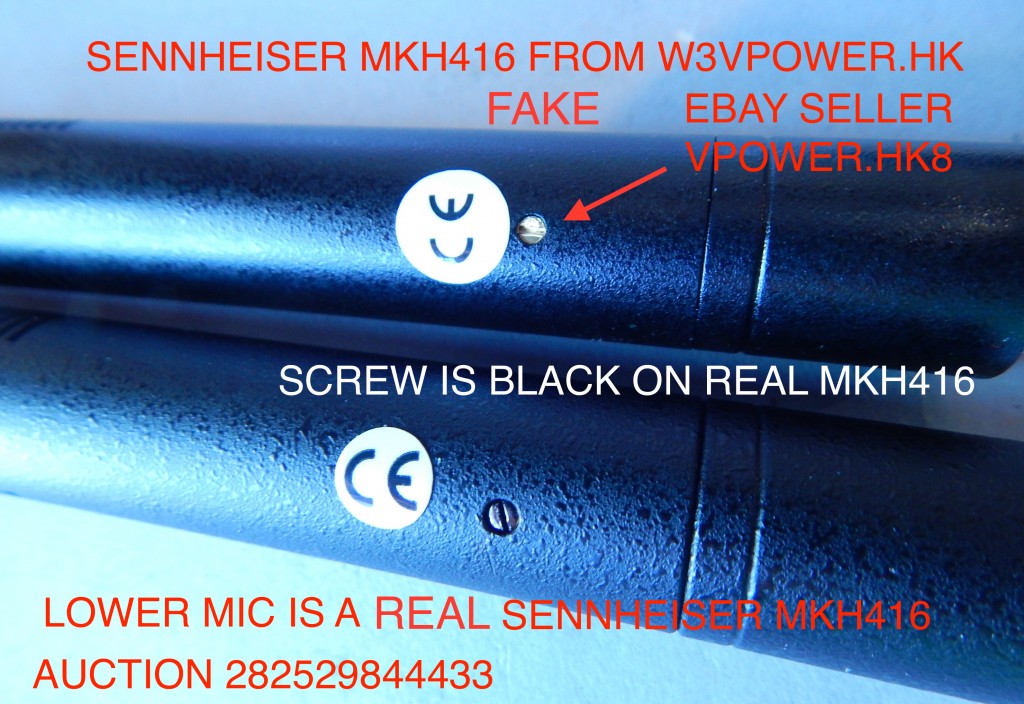 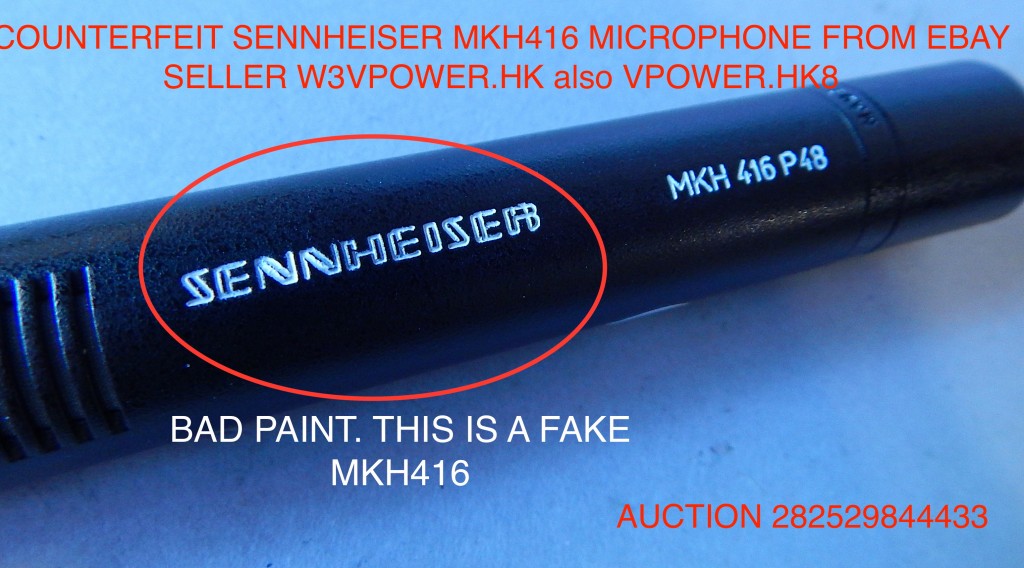 As an observer, I’ve been alerting eBay about these auctions for months. This time, I’m the buyer!

Spelling errors in the manual 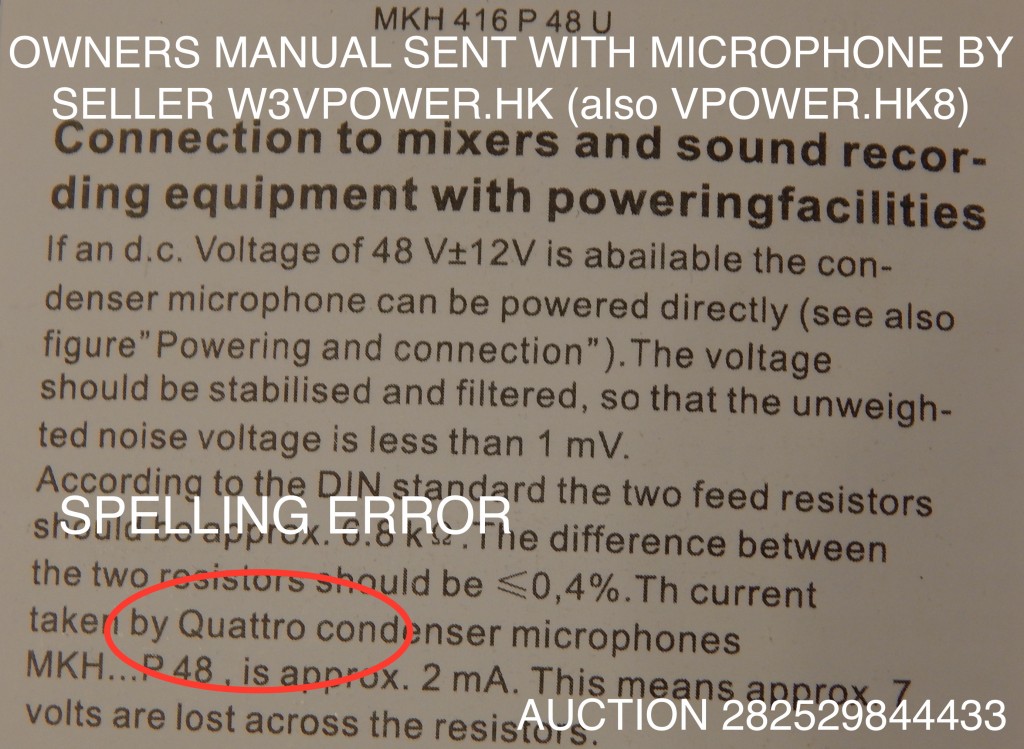 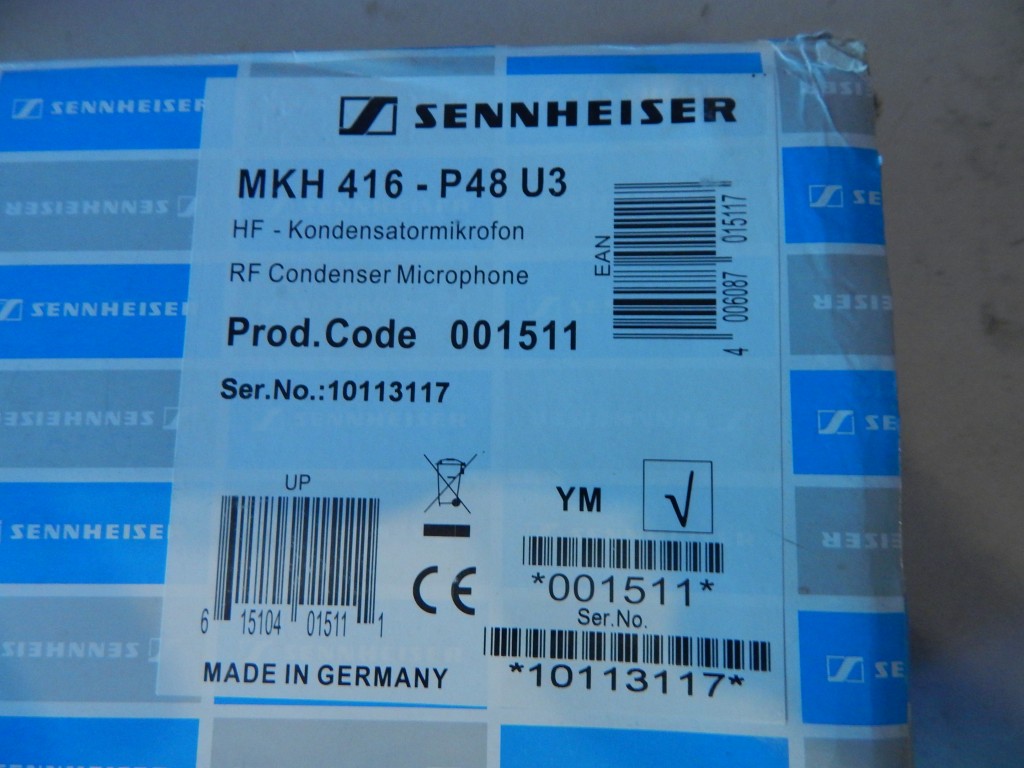 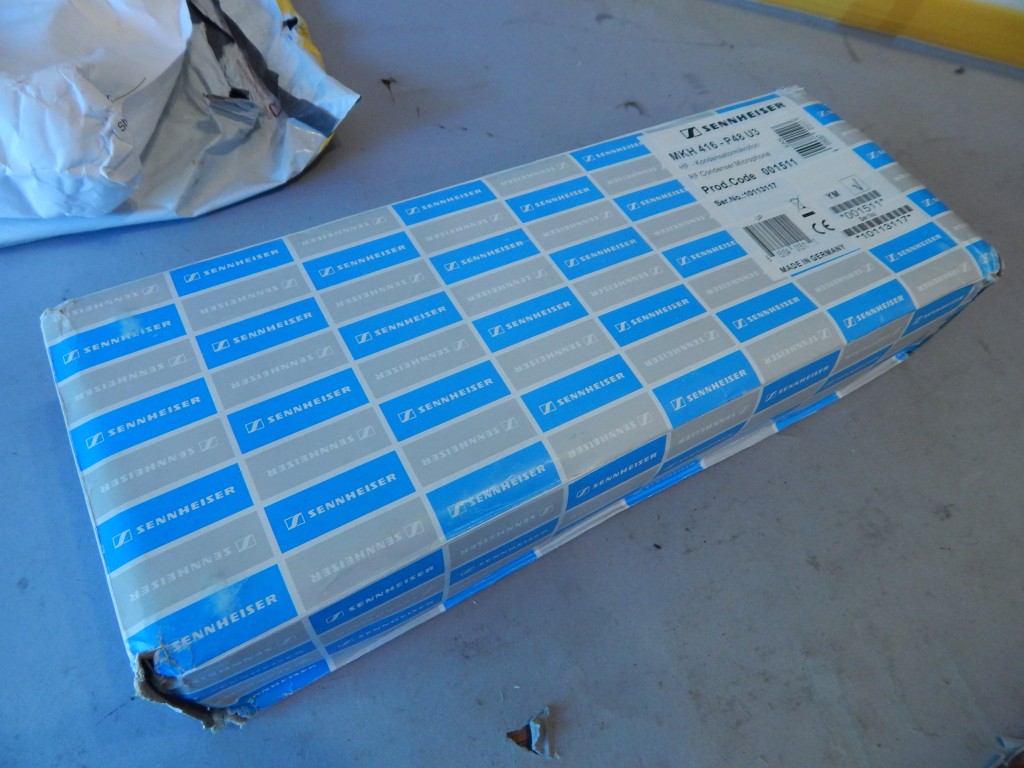 Fake 416’s come in this colored box. -Pretty dog eared. The inventory’s probably been moved around quite a bit 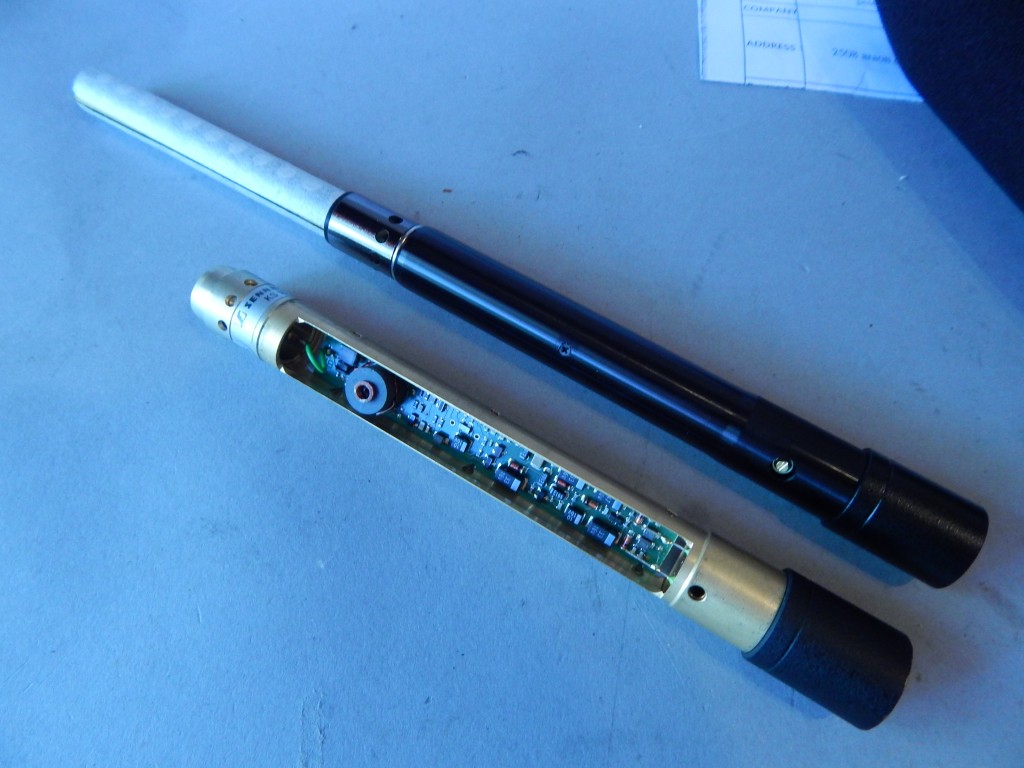 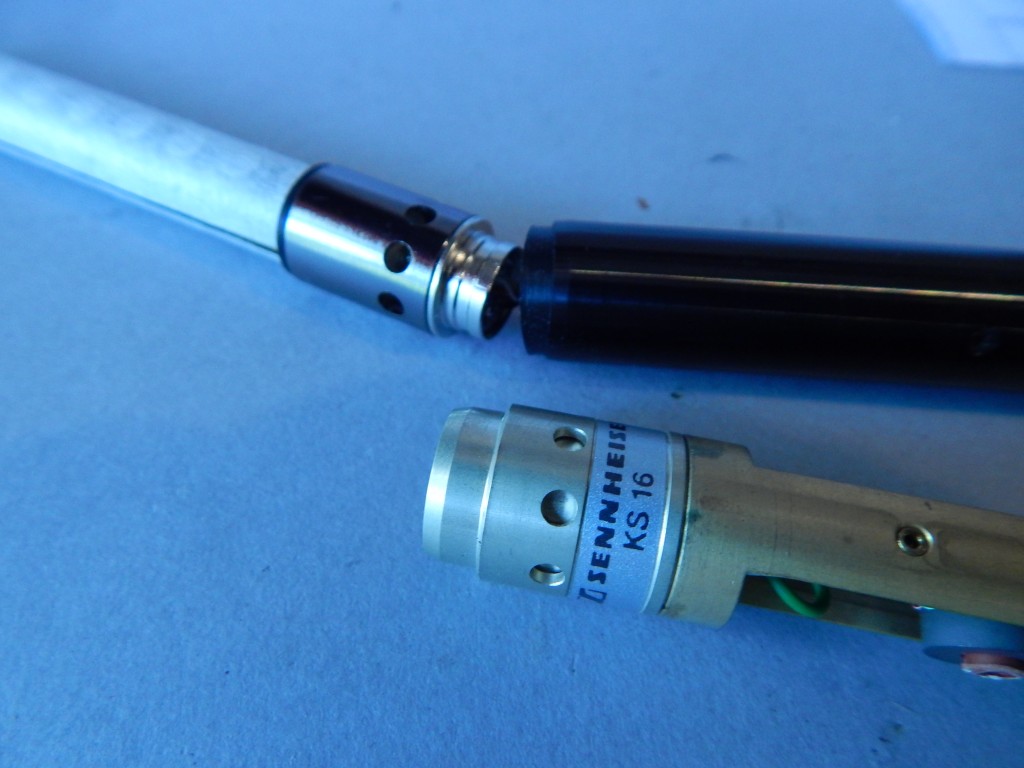 The fakes have none of the RF suppression properties of the real thing. They will noise-up around plug-on transmitters and walkie-talkies.  The output is about 3db lower than the genuine. (compensated for in the above sound file.) The painted lettering on the mic’s side is uneven and the letters are taller than the originals. The “Made in Germany” insignia is roughly stamped,  unlike the authentic mic.

Oh, and they sound very similar, if not almost just like the real thing. Did I mention that its very difficult to to tell the two apart by ear? Well, it is.  Anyone purchasing one of these fakes who didn’t know any better (like a student, amateur docmentartian or a wedding photographer) would be very happy with it.

The fake sounds miles better than the noisy 416 wannabe Aputure DIety. Those guys could learn a thing or two from our counterfeit friends. Much simpler design, too. See Rastop’s cool teardown video of a fake below. (He’s Gotham Sound’s repair technician). We immediately see that the build quality of the circuit board is pretty nasty.  The FET and 1 gigohm resistor indicate a passive electret capsule is mounted above the circuit board.

I see no need to replicate Rastop’s efforts. I’ll soon be making my ebay refund request, and I want to keep the sellers from making a damage claim. And if ebay’s policies follow through, or the seller responds negatively,  I may be able to keep the mic anyway, like a war trophy.

Some details on the counterfeiters:

The ebay auctions will always describe the 416 as “99% new”, or even “90% new”, as they feel this exempts them from having to respond to counterfeit claims.

They also have an alternate ID of w3vpower.hk

The seller seems to be a Chinese company that makes parts/batteries for electric bicycles.

The Sennheiser T-Power upgrade to 48 volt phantom website is now on-line. There is now a further means to eliminate T-power barrel adaptors and T-power battery supplies from your kit. Like the Schoeps CMC4 upgrade, our service allows the Sennheiser 416T “family” of RF condenser microphones to operate directly from 48 volt phantom power.

After requesting and receiving an order form from 416Tupgrade.com, include it with your microphone and ship to the address on the form. Turn-around time is typically 5 days. Please visit the site for further details on having your 416T shotgun upgraded to 48V phantom power. Thanks to all the intrepid sound mixers who fearlessly let me take their Sennys “under the knife, ” as we hashed out a robust and reliable conversion process for upgrading T-power shotguns to phantom power. 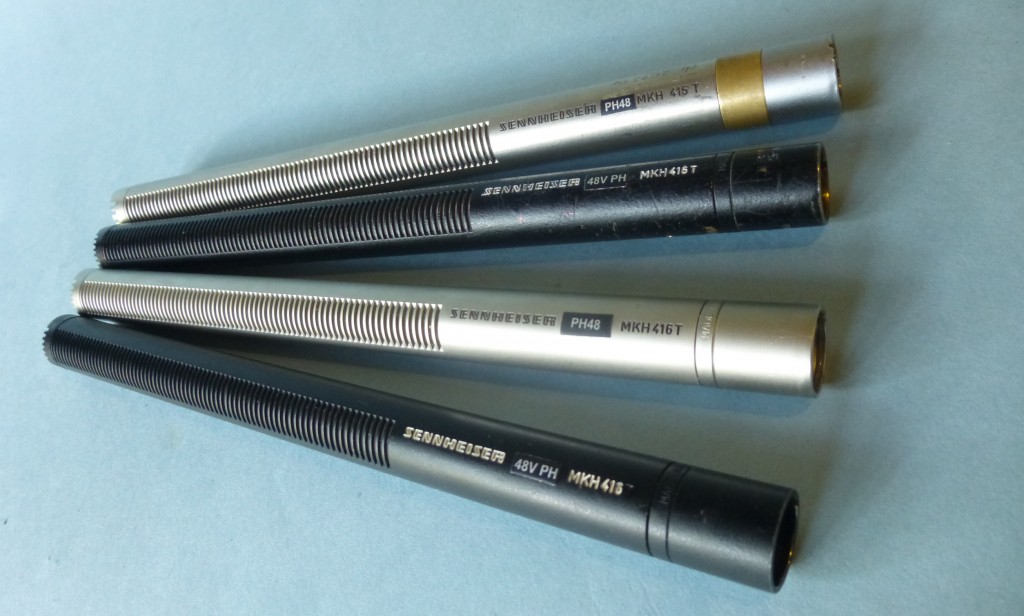 some of our prototype microphones for the 416T 48v phantom upgrade. 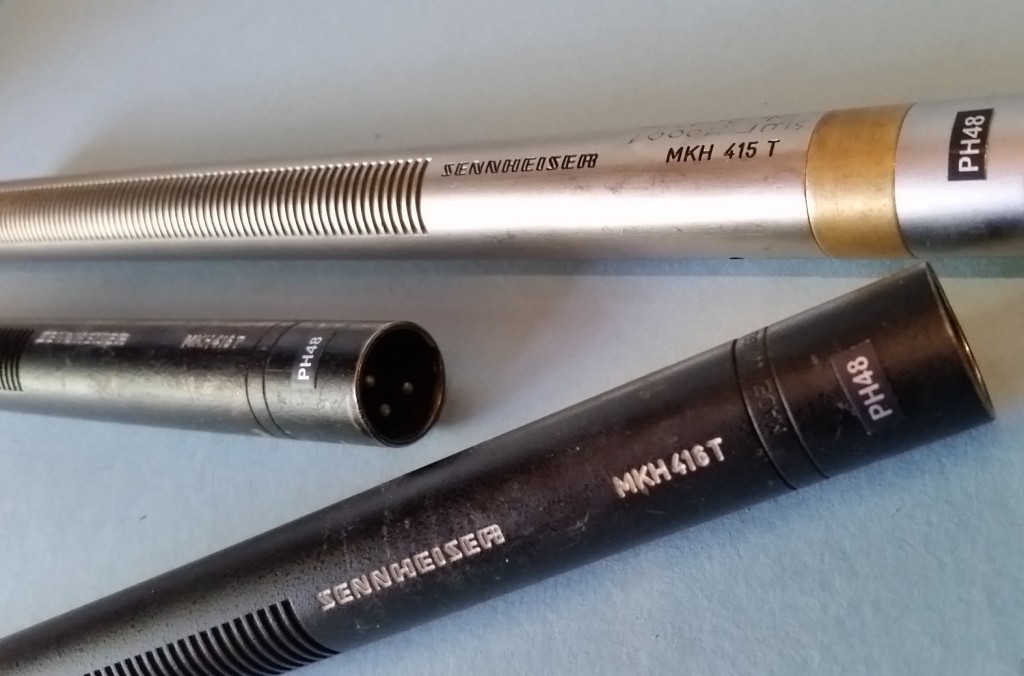 We’ve had many Schoeps CMC4 owners use our 48 volt phantom upgrade service to free themselves from cumbersome T-Power barrels and power supplies. This led to inquiries as to the possibility of upgrading the venerable Sennheiser 416T shotgun to 48V phantom power. After a more than a few willing 416T owners subjected their mics to our electronic musings, we’ve worked out a solid process for converting 416, 415, 815 and 816 T powered Sennheisers to 48 volt phantom. There’s business/website/details to be worked out, and we are looking to get things up and running by September’s end.  As seen in the photo above, the 416T will be branded with a thick aluminum, weather resistant PH48 label to remind users of the  48V phantom upgrade. The cost of the 416T upgrade is still being examined.   As with the Schoeps upgrade, the 416T will perform exactly as it did prior to the upgrade. Sennheiser’s proven RF design- providing immunity from RF or humidity- will remain intact.

Obviously, there will be additional circuitry added to the 416T interior that is not a part of a factory-issued 416.

An important consideration is servicing after the upgrade.  Service issues that arise on upgraded mics must be handled through us. If the issue does not rest with the phantom upgrade, further service may be required by Sennheiser, which we are prepared to facilitate.

Like the Schoeps upgrade, each 416T will be tested prior to, and after upgrading, with before/after test recordings, serial numbers and condition photos kept on file.

If you are reading this, you already know about hassle of using T-Power barrels in location sound work.  They are cumbersome and ill-fitting on the cart or in the bag. Those additional XLRs between mixer, jumpers, boompole and mic invite connection trouble and grounding issues. Accidentally connecting other mics to T-Power inputs invites disaster. 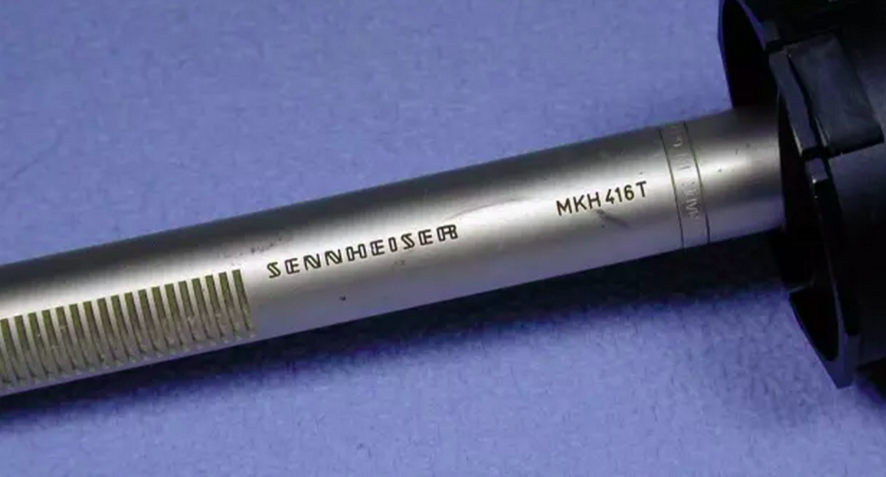 Consider retiring your T-power barrel adaptors and power supplies.  We are looking at offering a tag-along service to convert those old T-power adaptors into  attenuators…. perhaps very useful when interfacing with the Arri Amira, which has non-standard line level inputs. ( Gawd- not more barrels!) 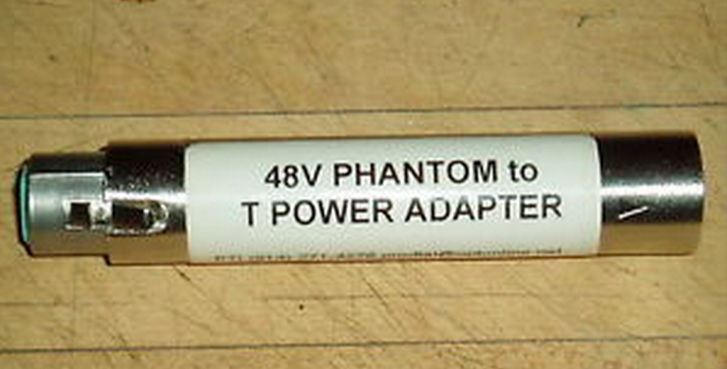 If you don’t own a 416, now may be the time to scan ebay or your favorite vendors used equipment listings, as 416T’s can be found for very good prices. 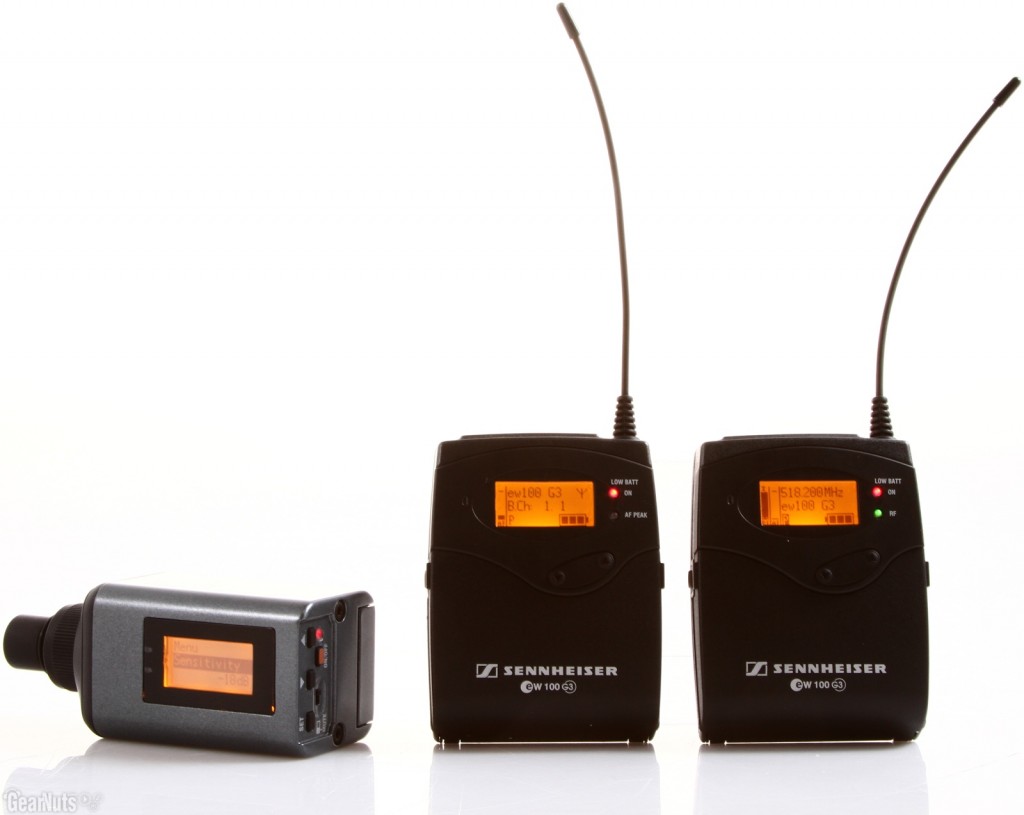 Here’s just a few reasons why I love G2/G3 for IFB/scratch track feeds over Lectro or Zaxcom IFB solutions:
– The mini plug input/output is highly compatible without need for custom cables. You can feed a scratch track to  a Red Epic with a standard ipod cable. Transmitter Mic/line input selectable thru tip or ring on the cable. You can hook up to anything with a good set of adaptors. Have you sent audio to a Black Magic camera yet? Non-standard, strangely wired 1/4″ jack inputs, but no problem with a Senn and an ipod cable with a headphone adaptor.
– you can feed  hops and Ifb with same transmitter. 1 less frequency to coordinate.

– I purchased my first set for scratch track hops in 2005. I now have 6 transmitters, 4 plugs, 6 receivers and 15 IFB’s. All purchased on ebay, and on average, less than half of retail. (Many misguided soundies and one-off project users buy these, then dump ’em. )

I’ve yet to have one break.  I’ve replaced many antennas at 5 bucks each, if you can solder well, you’re good.
– huge battery life. 3 days with a pair of lithium AA’s
-audio/rf metering on every unit
-Better range than lectro R1a or zax 2.4 gHz IFB units, owing to  external whip antennas
-transmitter won’t RF swamp a sound bag
-some venues now restricting 2.4 gHz devices as they compete with wifi (Zaxcom IFB)
-super wide input/output audio level settings. It’s easier to set the level on the Senn than dig around on the cryptic Red Epic’s audio screen. So why bother?
-instinctively intuitive to use. Big, understandable, backlit display
-great for feeding video assist, pa systems, or pulling feeds from PA or press feeds
–velcro them together for 2 channels, and they are still a very small receiver pkg.
-They’re Great crash wireless for talent- (about the only time I’ll put one on a talent).
-30 mw is low for transmitter power, but as an IFB, the pack is not against somebody’s body.
Instead, it is out in free space on your cart or bag. So no RF absorption from a sweaty cast member’s body.

I’ve have found that the Lectro IFBs are better if your crew needs to change receiver channels frequently to listen to different sound units. WIth Lectro R1a’s, They just push the volume button to cycle thru programmed channels, without needing to look at it. (Don’t know if the ERX can do this).

On a recent commercial, with one Senny transmitter, I fed scratchtrack to  two Alexas, video assist, client-lounge PA speaker and 15 IFB’s. Excellent range, kinda nice.
-iem headphone amp VERY loud. Even the regular receivers can drive a headphone at +6

-easy to coordinate freqs with internal pre-selects/rf metering, or use the freq finder app.

-I could go on. I’ve got buckets of these things.

But I never will use them as frontline talent wireless. They breakup a little at high audio frequencies (sibilant sounds) unless you stay well within the headroom, like half-level.